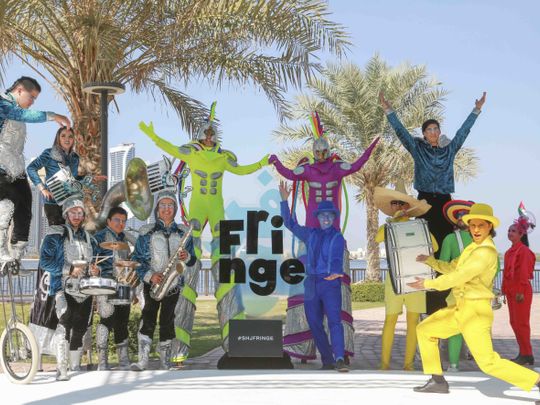 Sharjah: Sharjah will host a new edition of the International Fringe Festival, one of the world’s largest art and entertainment events, from January 16 to February 1, 2020.

The Sharjah Investment and Development Authority (Shurooq) announced at a press conference yesterday that in order to provide the multicultural community of the UAE with more choices to enjoy theater and performances, the emirate has officially joined the Global Fringe family.

This will be the first Fringe Festival in the Middle East.

The streets and stages of Sharjah will be the backdrop for 600 shows featuring a pandemonium of artists, color and creativity in key destinations in the emirate, from Al Majaz Waterfront to Al Qasba and the Al Noor Island. These Shurooq destinations will host more than 50 performers from the UAE, the region and the world, who will perform street and circus acts, theater, dance, music and other forms of interactive entertainment, for to delight UAE audiences of all nationalities and age groups.

I Hate Children’s Show, and many more for a total of 1,100 hours of entertainment.

To allow maximum engagement of schoolchildren in the UAE, the festival has organized special school packages, which will be offered in the morning. Regular programs will begin in the late afternoon and continue into the evening for families. She added that as a guide for parents, all shows have been ranked based on their best fit by age group, starting at 4-6, followed by 6-10 and 10-14. , and finally, 14 years and over.

Sharjah Fringe Festival 2020 is presented by Shurooq in strategic partnership with the Sharjah Commerce and Tourism Development Authority (SCTDA). It will be hosted by the National Arts Festival, South Africa, which is also producing a thriving South African Fringe, in collaboration with Dubai-based events company Dolphin Creative.

Ahmed Al Qaseer, COO of Shurooq, explained: “By bringing Fringe to Sharjah, we want to send the message that ours is ‘a city of choice’. Through Fringe, we want the over 200 nationalities residing in the UAE to connect with the global artistic language. At the same time, we are building bridges with other cultures, which reflects the vision of His Highness Shaikh Dr. Sultan Bin Muhammad Al Qasimi, member of the Supreme Council and Ruler of Sharjah, who has chosen knowledge, culture and arts as a way of development.