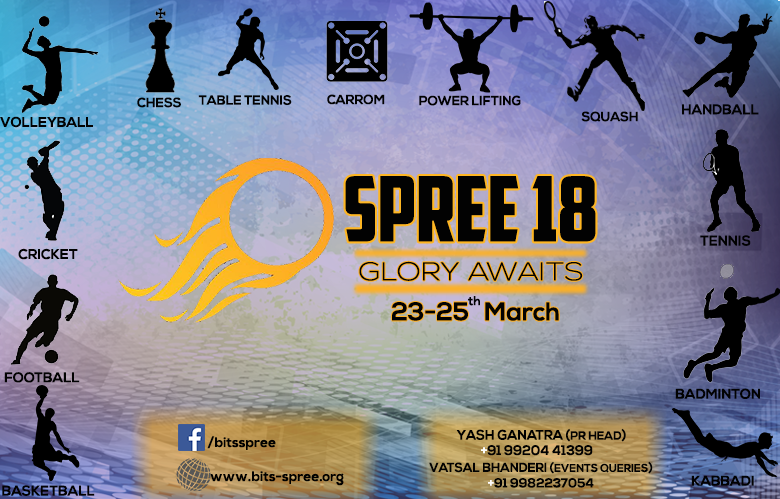 India’s largest inter-university sports and entertainment festival, Spree, which runs March 23-25, 2018, has been a success since its inception 12 years ago, with each year only raising the bar for quality . This year, the number of participants is expected to exceed 2,500, thus providing a high competitive quality to each of the sporting events – football, basketball, cricket, volleyball, badminton, tennis, squash, table tennis, carrom, chess, powerlifting and kabaddi. Colleges in Mumbai, New Delhi, Pune, Jaipur, Hyderabad, Indore and so on send their most athletic students to compete for the laurels and hefty monetary incentives of the Spree.

True to its promise to stand out from all other sporting gatherings, Spree has kept in sync with the evolving nature of the sport by including standout events like Ultimate Frisbee, Kho Kho, Kabaddi, Tug of War, Pool, Gully Cricket and Futsal. In addition, the festival also has a wide range of social initiatives under its heading, such as Udaan, the Spree Marathon and the “Act to Inspire” campaign. Udaan, organized by Spree in collusion with the NGO Nirmaan on February 25, was for the benefit of disabled children. Various sporting events, workshops and celebrity conferences make the 3 days of Spree a source of happiness for the less fortunate. The Spree Marathon on March 18, in association with Diageo, will take place in Panjim and is a 10 km race in support of the “Don’t Drink and Drive” campaign. The “Act to Inspire” campaign, launched in 2013, makes Spree work with CRY to organize blood donation camps and clean-up campaigns in cities where pre-Spree elimination is taking place.

Spree also provides a stage for athletes to give motivational speeches and share their journey in sport. This year’s guests, award-winning cricketer referee Simon Taufel and Olympic gold medalist AbhinavBindra, add to a rich legacy of sports stars in Spree. Several interesting sports-related workshops are also organized, which provide a crash course in a component of a sport, for example dribbling in soccer. Finally, Indian EDM artist and audience favorite, Nucleya, will take care of the console on the second night.

Thus Spree, BITS Pilani Goa emerges as a complete whole: a renowned festival with high standards for its sporting events, but an equal fulfillment of its responsibility to society. With great entertainment throughout the festival and all the sporting sparkle on offer, there will be no dull moments in Spree 2018. Glory awaits!