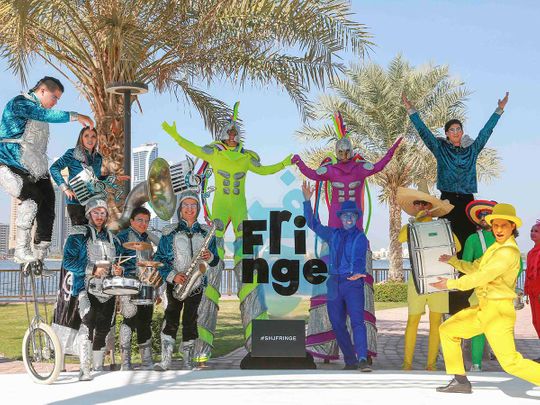 Sharjah: A new edition of the International Fringe Festival – the world’s largest art and entertainment event – has arrived at the cultural heart of the Middle East, Sharjah.

The Sharjah Investment and Development Authority (Shurooq) announced at a press conference on Wednesday that the emirate has officially joined the global Fringe family and will host the first Fringe festival in the Middle East. The festival will be held for 17 days from January 16 to February 1 with the aim of offering the multicultural community of the UAE more choices to enjoy theater and performances.

The streets and stages of Sharjah will be the backdrop for 600 shows featuring a pandemonium of artists, color and creativity in key destinations in the emirate – Al Majaz Waterfront, Al Qasba and Al Noor Island.

These Shurooq destinations will host more than 50 performers from the UAE, the region and the world, who will perform street and circus acts, theater, dance, music and other forms of interactive entertainment, for to delight UAE audiences of all nationalities and age groups.

Sharjah Fringe Festival 2020 is presented by Shurooq in strategic partnership with the Sharjah Commerce and Tourism Development Authority (SCTDA). It will be hosted by the National Arts Festival, South Africa, which is also producing a thriving South African Fringe, in collaboration with Dubai-based events company Dolphin Creative.

Sharjah, a city of choice

Ahmed Al Qaseer, COO of Shurooq, explained: “By bringing Fringe to Sharjah, we want to send the message that ours is ‘a city of choice’. Through Fringe, we want the over 200 nationalities residing in the UAE to connect with the global artistic language. At the same time, we are building bridges with other cultures, which reflects the vision of His Highness Dr Shaikh Sultan Bin Muhammad Al Qasimi, member of the Supreme and Sovereign Council of Sharjah, who has chosen knowledge, culture and the arts as a means of development.

“Residents and visitors to the emirate will have the first opportunity to meet the international Fringe community that has visited Adelaide, Brighton New York and the rest of the world. We look forward to participating in hundreds of entertaining trips with these artists to our major public destinations. Sharjah Fringe truly embodies Shurooq’s vision to lead the social, cultural, environmental and economic development of Sharjah, ”he added.

Majid Hamad Al Suwaidi, director of the overseas promotion department at the Sharjah Trade and Tourism Development Authority, said: The emirate’s tourism offer by allowing visitors and tourists hundreds of choice of entertainment.

The festival has a wider appeal beyond the theater audience, and Sharjah designed its

“It will take place over a period of 17 days and will be 1,100 hours of pure entertainment,” she said, adding, “You will enjoy high-level art from all over the world for free.

Rayi also noted that to allow maximum engagement of schoolchildren across the UAE, the festival has organized special school packages, which will be offered in the mornings. Regular programs will begin in the late afternoon and continue into the evening for families. She added that as a guide for parents, all shows have been ranked based on their best fit by age group, starting at ages 4-6, followed by categories 6-10 and 10-14. , and finally, 14 years and over.

History of the Fringe Festival

Rayi added that the Fringe Festival was born out of the passion of a group of artists who had a stronger commitment to their craft and their artistic message to people than being accepted into a traditional stage. A bold and innovative concept for the 1940s era that emerged in Edinburgh quickly caught up with the rest of the world. Today, more than 200 Fringe events are held around the world.

The Edinburgh edition remains the largest, with an average of 3,000 shows. They sold more than 3 million tickets for their 2019 edition. Only the World Cup of the Olympic Games shows higher figures.

With a history stretching back over 5,000 years, modern Sharjah is the cultural powerhouse of the UAE and the Middle East dedicated to supporting creative minds, artists and performers in the country and around the world. With a cultural project based on the pillars of inclusiveness, innovation and the exchange of new ideas, 2020 Sharjah Fringe marks the start of a new artistic movement in the UAE and reinforces the emirate’s vision of embrace and encourage the creative exploration of ‘doing things differently’.